It’s been a great couple of weeks for books and bookish things at our place. Let’s start with Poem In Your Pocket Day (April 30), which is such a wonderful way to close out National Poetry Month. It crossed my mind in mid-April, and I lazily considered which poem I’d carry. Then I promptly forgot all about it until the morning of the thirtieth. I did a quick Google search and came up with the following poem for my truck-obsessed toddler:

The backhoe digs a big, big hole.
The dump truck hauls the dirt.
The grader scrapes the ground so smooth.
While all the workers work.

I carried the final stanzas from T.S. Eliot’s “The Love Song of J. Alfred Prufrock,” which I love and which is always a great fallback when I’m looking for words to move me:

Shall I part my hair behind?   Do I dare to eat a peach?
I shall wear white flannel trousers, and walk upon the beach.
I have heard the mermaids singing, each to each.

I do not think that they will sing to me.

I have seen them riding seaward on the waves
Combing the white hair of the waves blown back
When the wind blows the water white and black.
We have lingered in the chambers of the sea
By sea-girls wreathed with seaweed red and brown
Till human voices wake us, and we drown.

I even tucked a little four-line parody of “I’m a Little Teapot,” titled “I’m a Little Baby,” into my five-month-old’s waistband for the day. 🙂

My favorite part of Poem In Your Pocket Day actually came the following morning when I got my almost-three-year-old dressed for the day. He immediately dug his hands into his pockets and asked “Where’s my poem?” before requesting to carry it around for a second day. (I acquiesced, of course, and was a rather proud momma.)

Last Saturday was the first nationwide Independent Bookstore Day, a holiday that I was all too happy to get on board with. Since it was the weekend before Mother’s Day, I chose to celebrate early and we had an evening of family book shopping in Doylestown, PA. 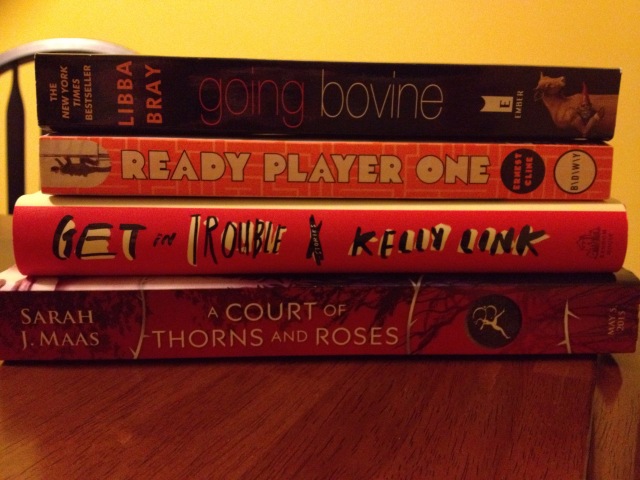 The stack of books above is from Doylestown Bookshop, one of my favorite independent bookstores. I was first there five years ago to meet Rachel Cohn and David Levithan on their tour for Dash and Lily’s Book of Dares and finally made it back. They’ve got a great selection of books, a whole wall of staff picks, and some great bookish gift items. The children’s section has room for little ones to play and everyone I’ve encountered there has been pleasant. It’s over an hour away, so I hardly ever make it out, but it’s worth the drive every now and then. It was so difficult to narrow it down to these three books — I almost came home with Kazuo Ishiguro’s The Buried Giant instead of the Kelly Link–  but I managed. I’ve read absolutely nothing by Kelly Link, but this collection keeps catching my eye, so I thought I’d give it a go. I love Libba Bray and haven’t read Going Bovine yet, so there’s that. (I actually wanted to buy a copy of Beauty Queens, but they didn’t have it.) And I got Ready Player One at a heavily-discounted price for my Kindle last year and loved it so much that I wanted to own a hard copy.

For Independent Bookstore Day, they were hosting an in-store scavenger hunt with ARCs as prizes (hence the Sarah J. Maas), which is such a great idea. The search had items like “Write the title of a book in our humor section that you think would make you laugh” and “Based on their recommendations, which staff members’ bookshelves would you like to raid?” Something like that would make a great class activity in a library (with a few modifications). I’ll have to remember that. 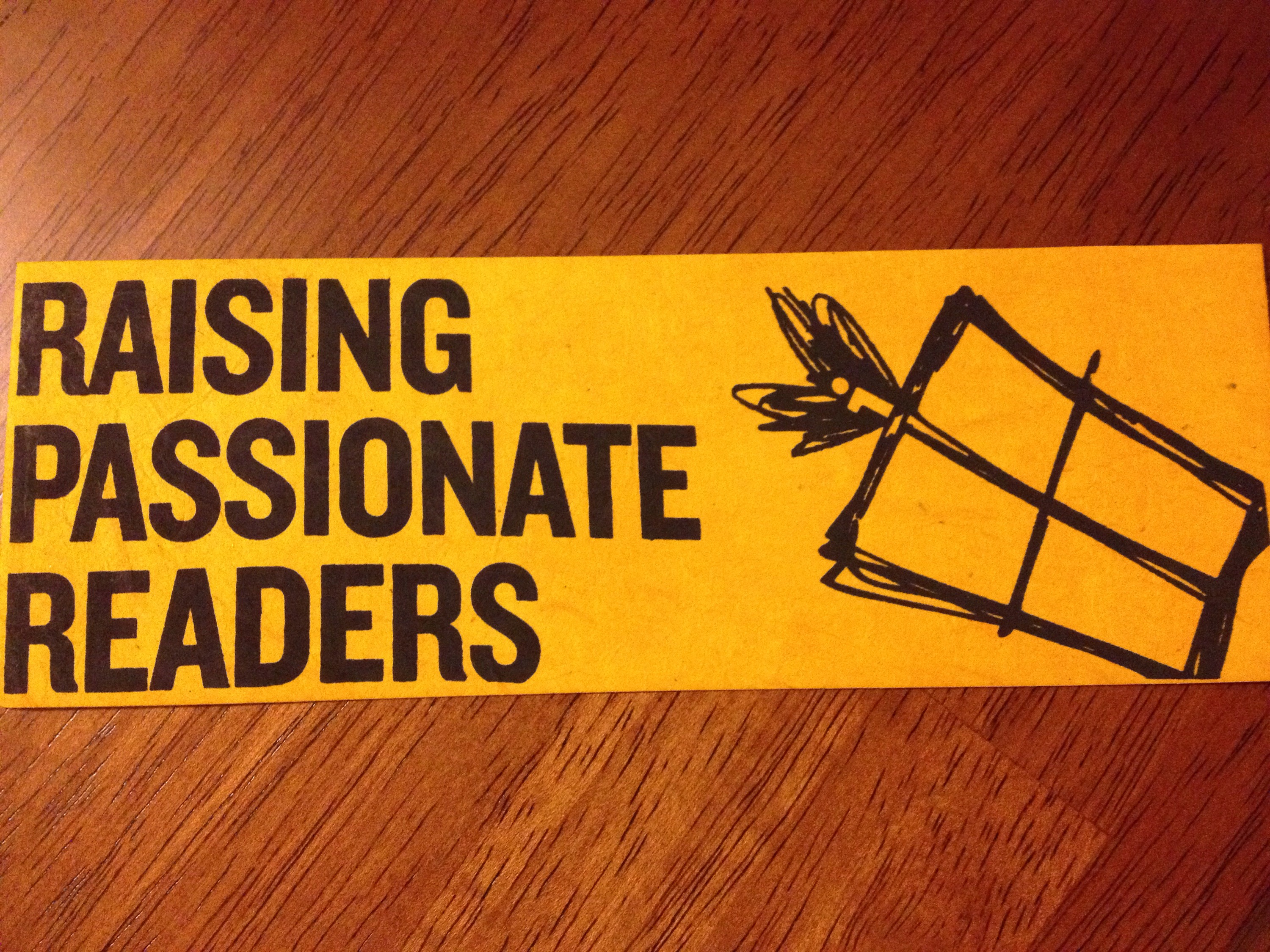 Is this the perfect bookmark for me, or what? 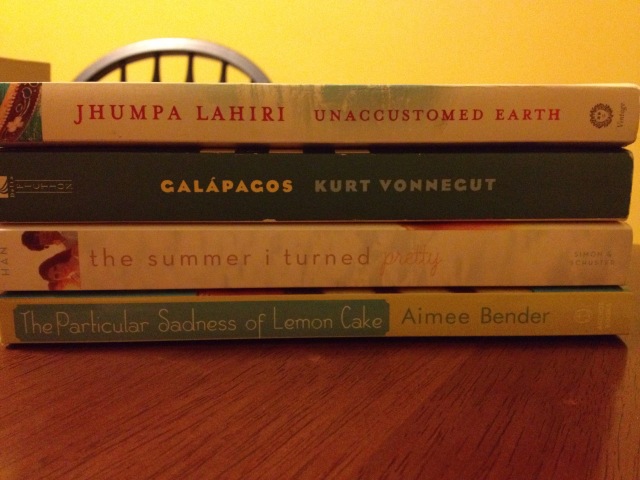 After shopping at Doylestown Books, we hopped across the street to Central Books, which is where the above pile hails from. Central sells used books, many in excellent condition and most selling for $4.95 each. (The Aimee Bender is spotless and looks brand new, so it was a steal at that price!) The other three books in this pile were 95 cents each; it seems that when a book has been knocked about a bit, they sell it for under a dollar. And since my books tend to get their fair share of knocking about anyway (I carry them everywhere), it doesn’t really bother me if they come my way with a few scuffs as long as they’re not falling apart. There were even boxes of books on the front porch for under a dollar each, some as low as 35 cents. (I nabbed three Thomas and Friends titles for my son out there; he was thrilled.) The shop is small and a bit difficult to navigate if there are other shoppers, but I found some great things, so it was worth it. Staff wasn’t unfriendly, but after the love-fest across the street, I wasn’t terribly impressed with customer service. 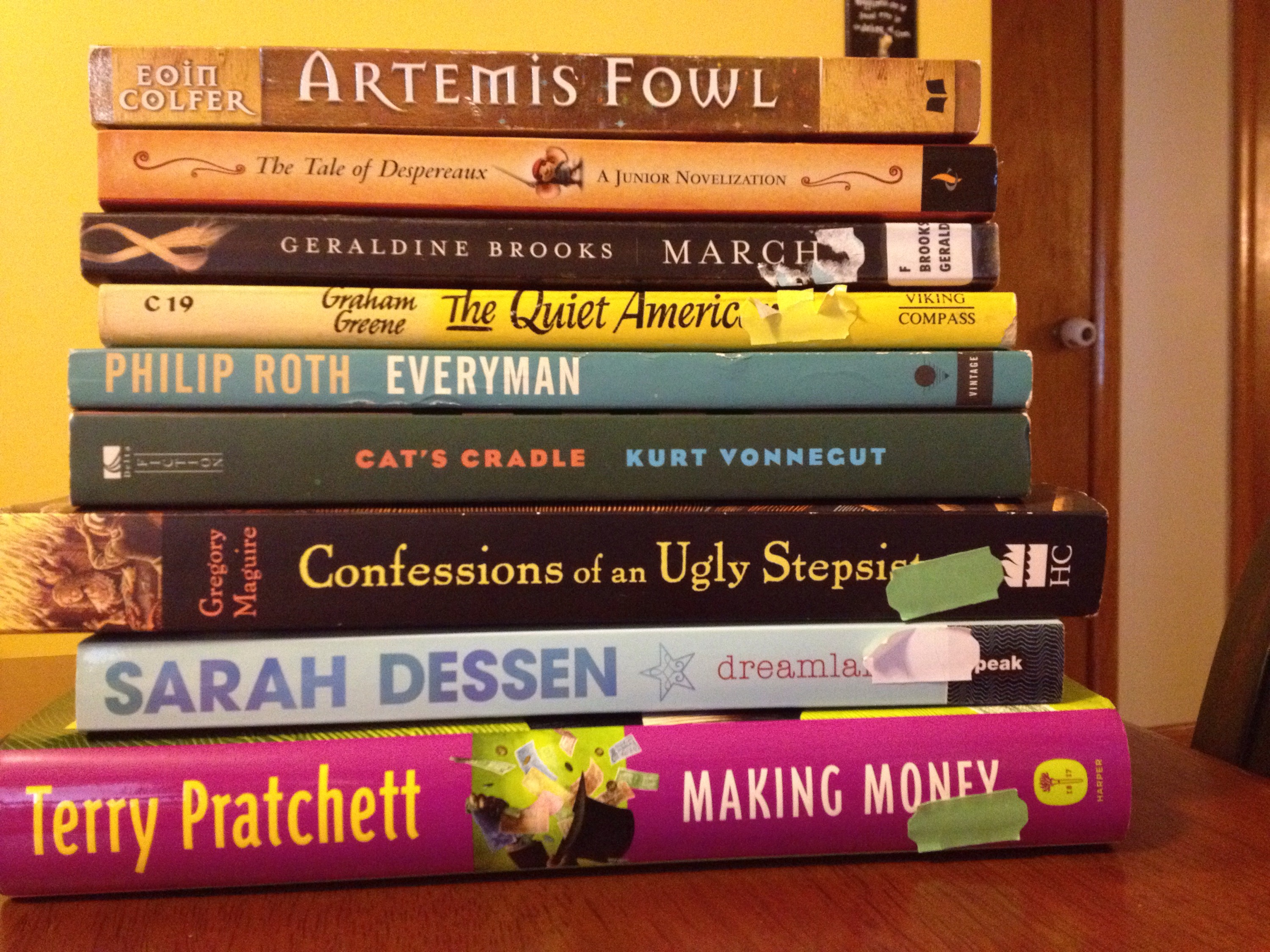 The above stack of books — purchased the week before Independent Bookstore Day, but I still want to share them with you — is from my local Salvation Army, which sells books for 90% off the cover price. (Also, one day a week most merchandise is half priced, so some of these books were far less than a dollar!) I love giving secondhand books a new home. The top two are for my boys when they get a little older (though I’ll probably read them before then), the Geraldine Brooks is because I won’t say no to a Pulitzer Prize winner, Graham Greene and Vonnegut are because I want to read more classic writers this year, and Philip Roth is because my friend is a huge fan and I haven’t read much of his work. I haven’t read much Terry Pratchett, only Good Omens, largely because I don’t know where to start. But the book was so inexpensive that I figured it was worth a shot. (I take more chances on used books because there’s not much of a financial commitment.) I read Sarah Dessen ages ago and don’t remember much about her, so I thought this would be a nice way to re-visit her. And Gregory Maguire? I own a few of his books now and haven’t read a single one. Maybe one week I’ll just binge-read all his stuff.

Annnd that’s it for today. Phew! It’s simultaneously overwhelming and exciting to see these stacks of new books. I can’t wait to experience them all! 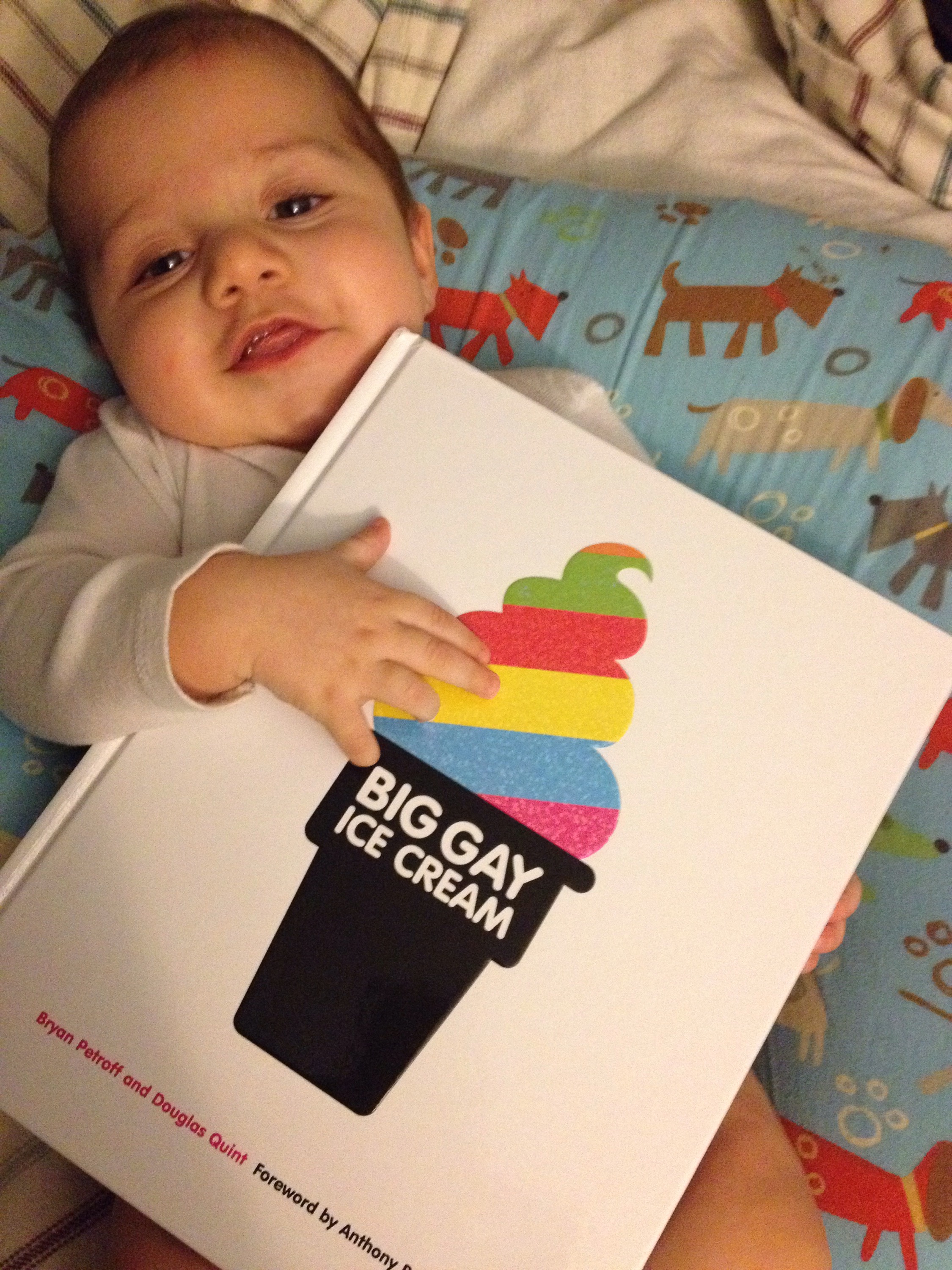 Closing with a shot of my younger son holding our new favorite cookbook: the Big Gay Ice Cream book, another new purchase!

Have you picked up anything exciting lately? Let me know in the comments! 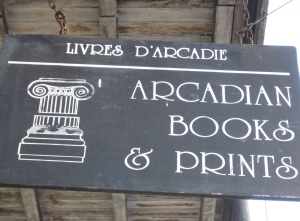 Arcadian is one of my very favorite bookstores. Maybe it’s because when I’m there, I’m in the French Quarter, which is one of my favorite places. Or maybe it’s the fact that the inventory seems to consist of all the books I didn’t know I was dying to read. Whatever the reason(s), I would squeeze myself into a corner, sit on the floor, and read for hours if I wasn’t terrified of stacks of books tumbling down upon my head. 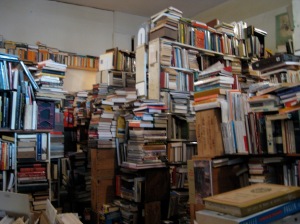 This is how I imagine the inside of my head looks.

I first visited Arcadian on a work-related trip to New Orleans in the spring of 2007. I spoke to the proprietor about the pros and cons of being a bookseller, something that I was considering at the time (and still hold as a maybe-someday-if-money-wasn’t-an-issue sort of option). He was kind to give me so much of his time; he even gave me his card in case I had any future questions. I bought a copy of A Confederacy of Dunces, which he suggested due to my request for a novel that would always remind me that I bought it in New Orleans. The French Quarter is full of bookstores (and literary history, but that’s another story for another day), but this one stood out because of the selection and the personal service I received. 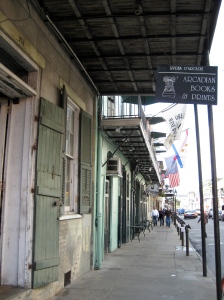 You could easily slip right by, but that would be very sad for you.

When I was pregnant with my son, my husband and I planned one last vacation (to New Orleans, obviously, or what would be the point of mentioning it in this post?). I packed as lightly as possible, leaving lots of room in my suitcase and carry-on for all of the books I knew I would buy in such a bookstore-dense town. During our mandatory stop at Arcadian, I bought a biography of Lewis Carroll (Lewis Carroll: Fragments of a Looking-Glass by Jean Gattegno), a Jasper Fforde novel (I forget which, but one of the Nursery Crimes), Beyond the Looking Glass: Novels, Stories & Poetry from the Victorian Era, and a couple of others that I’ve forgotten. (Don’t know if I was in a particularly fairy-tale-seeking mood or if that’s what the inventory was heavy on that day, but it worked for me.)

This bookstore will always hold a piece of my heart. Maybe I found it at the right time in my life, when I’d just been accepted to grad school and thought that anything was possible (become a bookseller? writer? lit professor?). Or maybe it’s the fact that the owner knows where everything is, regardless of the teetering heaps of books that don’t appear to be organized in any fashion whatsoever, just like me with my own personal library. Whatever the case, stepping into this overcrowded room feels a little bit like coming home to me, like it’s a place I’m meant to be, and that’s what a good bookstore should do to a true reader. 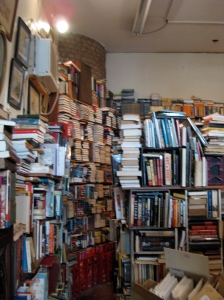