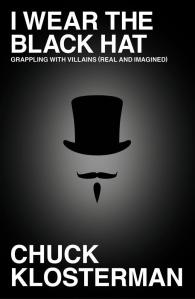 I Wear the Black Hat by Chuck Klosterman. 224 pp. Scribner.

I’ve been reading Chuck Klosterman since his column in Spin magazine. I loved how he had so much to say about things I’d never even thought of before. (And I think a lot.) One of my favorite articles was about how The Darkness would never be sufficiently appreciated in the US because, in America, bands can either be good or funny (but not both). Maybe I’m not a true American, then, because I love bands that have that perfect blend of talent and humor — like The Darkness, yes, or Flight of the Conchords. I mean, how can you not love this?

But back to Chuck. I next encountered his writing when I grabbed a copy of Sex, Drugs, and Cocoa Puffs, which I’ve read multiple times and which remains my favorite of his works. (My future sister-in-law borrowed my copy a few years ago and never returned it…guess it’s time to re-buy!). Klosterman can rant and rave like no other, and I love hearing what he has to say, even when I disagree.

That’s how it was with I Wear the Black Hat. It’s a fascinating descent into the examination of villains and that suggests that maybe they’re not as bad as we think they are — or maybe they’re even worse. From Machiavelli to Bill Clinton to Batman, Klosterman examines the qualities, both good and bad, that the human race is willing to tolerate in others. At what point, exactly, does someone become a villain? Why?

While I can see where he’s coming from in some areas, there’s this thing Klosterman does where he stands by his argument even when it starts to unravel a bit, when there’s something he wants to use as evidence that doesn’t logically support his claims. In fact, at these times he seems to hold on to his opinions even more tightly, even as they’re falling apart around him. Or maybe I just feel that way because those are the times when I disagree, so everything feels shabbier to me. Regardless, Klosterman is the guy at the bar who never shuts up, but you don’t mind. In fact, you don’t want him to. You want to hear his thoughts, both good and bad, because they make you examine yourself and your own ideas that much more closely. And for this, to him I tip my (black) hat.

All in all: Thought-provoking, funny, and absolutely worth reading. Better than much of his recent stuff, in my opinion.