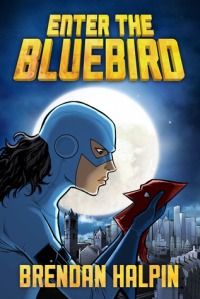 What’s not to love about an action-packed YA superhero book, one with a flawed yet cheer-on-able (I know that’s not a real word. But I wanted to use it anyway.) lead character? What if the action hero was a girl? Mind-blowing, I know. Girls are supposed to be the ones getting saved, not doing the saving. Or they’re relegated to the role of secondary superhero. But not in this one. The good guys in this story don’t need cups in their costumes (at least, not below the belt…).

Okay, I should probably start over. I’m getting sidetracked and quippy because of how much fun this book was, but I should begin at the beginning, as the King of Hearts says, and bring you along with me. Sorry about that.

I was first introduced to author Brendan Halpin when I read A Really Awesome Mess, his collaboration with Trish Cook about a teen rehabilitation center (it was great; read my review here). So when I had the opportunity to review his latest project, Enter the Bluebird, I jumped at the chance. (Not literally. I have a bad knee from years of dance classes, performances, etc.) My interest was further piqued when I learned that Halpin had run a successful Kickstarter campaign to fund the book’s production. He must have had quite a bit of faith in this story in order to put it all on the line like that, right? My question was whether or not he was on track. I mean, you can Kickstart just about anything these days, and some of the ideas are truly terrible.

But not this one. Enter the Bluebird is a truly excellent book. Let’s start with the cover, shall we? I mean, look at it. Even if I’d never heard of the author, I can pretty much guarantee that this book would catch my eye and I would snatch it off the shelf for a closer look.

Then there’s the story itself. Enter the Bluebird is about Julie Rouge, a teen girl who’s been training under her mother,  Sonia (superhero Red Talon), and is eager to embark on her own crimefighting career. Sonia works hard to train Julie as rigorously and meticulously as possible, but Julie becomes frustrated with her mother’s protectiveness and longs to get out there and kick some butt. Her chance comes all too soon when her mother goes missing and Julie is left to solve the mystery of her mother’s disappearance and fight The Syndicate, which is exactly what it sounds like: a pack of bad guys who not-so-secretly runs the city.

This book contains everything a superhero book should: it’s got humor, tons of action, a dystopic city in need of redemption, a heartbreaking backstory, terrifying villains, and a heroine that makes you want to stand up and cheer. Plus, the action scenes are clean and, as such, are some of the best I’ve ever read. All too often, authors get caught up in description, and the fight scenes suffer for it. “A little less talk, a little more action” is the way I like my literary fisticuffs, and this book truly delivers on the action.

All in all: Worth reading, and worth buying for teen guys and girls. I know that the book is almost always better than the movie (with rare exceptions; I’m looking at you, Fight Club), but I’d still like to see this one on the big screen. It’s a great book, and it has the potential to be an awesome flick under the right direction.